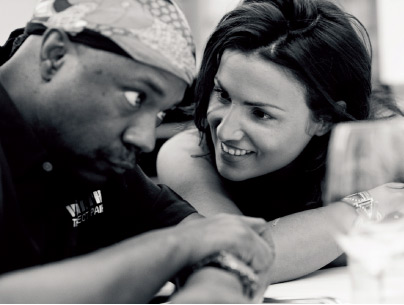 "INTRODUCING LETIZIA GAMBI" is the title of the debut record of artist Letizia Gambi (on Jando Music label), a project conceived and developed with one of the most acclaimed musicians, jazz drummer, producer, multi Grammy Award winner: Lenny White.
White was so won over by the talent and the project dveloped by the neapolitan singer, that after eighteen months of hard work between Milan, Rome and New York they created "Introducing Letizia Gambi" on the Jando Music label. "Introducing Letizia Gambi" is the synthesis of two apparently distant worlds and yet able to blend them in perfect harmony, creating an authentic sound that combines the Black-American heritage with Mediterranean melodies. It is a "Cultural fusion".Lenny and Letizia arranged in an international and personal way some of the most popular songs of the Italian and Neapolitan repertoire, international covers, and composed original tunes of great musical impact.  The refined sensibility of the Italian singer, together with the exceptional experience of the American artist, merged to give birth to a 21st Century Musical Approach, as the two artists like to define it. The Album is sung in English, Italian, Neapolitan and Spanish and there are a few composition written by Lenny and Letizia together.  This idea sparked the interest of some legendary musicians who accepted the challenge. Ron Carter, Chick Corea, Wallace Roney, Patrice Rushen, Gil Goldstein and Gato Barbieri, with their extraordinary performances have significantly contributed to the success of the project.  The mediterranean passion speaks through the Jazz language. "Introducing Letizia Gambi" is held together by a common unique style. 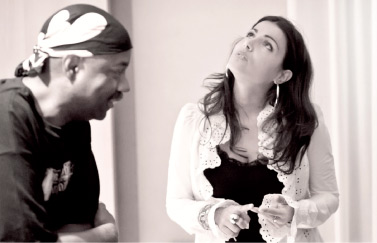 From "Appocundria", a cover of the famous Italian Pino Daniele, enhanced by the piano performance of Chick Corea, to "The question of U", their cover of a Prince tune, with a solo of extraordinary beauty by Gato Barbieri. The famous "Tu sì 'na cosa grande" by Domenico Modugno becomes "You are so special" the first ever english version recorded and approved by the great composer's wife; a wondeful ballad featuring the great Wallace Roney. The album was recorded in NY and NJ, the only song recorded in Italy is "Secret Tears" an interpretation of the old Italian aria "Una Furtiva Lagrima" by Gaetano Donizetti from the Opera "L'elisir d'amore" where Letizia put new english lyrics recorded with some of the best musicians on the Italian scene. Antonio Farao', Dario Rosciglione and Max Ionata.

Lenny White. As one of the founding fathers of the musical movement that became known as “Fusion” , he had played on two of the most important Jazz records ever made, Miles Davis’s “Bitches Brew” and Freddie Hubbard’s “Red Clay.” He earned a world-wide reputation as the drummer in the mid-’70s super group Return to Forever together with Chick Corea and Stanley Clarke. His versatility attracted interest of many of the finest jazz musicians leading to collaborations with Joe Henderson, Herbie Hancock, Santana, Stan Getz, Gil Evans, Jaco Pastorius, Gato Barbieri, Wayne Shorter, Al Di Meola, Marcus Miller ,Michel Petrucciani (just to mention a few).He also has been involved  with different genres artists like  Santana, Bill Withers, Chaka Khan ,Nancy Wilson and rappers LL Cool J and Big Daddy Kane. White scored soundracks (Spike Lee’s “School daze” & Reginald Hudlin’s “House Party” together with Marcus Miller),composed orchestral music and he’s still working on his first Opera.He won 5 Grammy Awards so far.

Some music seems easiest to define by describing what it's not. Especially when it's music that marks such a strong, confident arrival of new ideas – or a revival of older ones – or some compelling, intelligent mix of what's new and what's new again.

Introducing Letizia Gambi is one of those dramatic arrivals that challenges categories and assumptions. Yes, the number of jazz-world heavyweights on this disc is nothing short of staggering, yet it's clearly not a jazz album. Lovers of the Great Neapolitan Song-book will find a number of familiar friends here – reconfigured in surprising ways – but it's not a simple revisiting of those classic melodies. And though a few of these tracks reveal a refined, Euro-chill kind of feel, they do not constitute an artful pastiche of laid-back styles that has lately grown to a common fad.

Introducing Letizia Gambi is a focused and a warmly absorbing debut by a young woman who, with the support of a visionary producer and seasoned musicians, has woven a rich variety of musical sources into a sound that defies stylistic distinctions and geographic distances. It's a longer way of saying simply that this album is indeed a rare thing – one that deserves to be heard and considered according to its own merits.

There's a lot here to hear and to consider, including Gambi's own story. She's a Neapolitan by birth and musical identity. Displaced to Como in the north of Italy as a youngster, she grew up compelled to a path of artistic expression. She danced, sang, performed, painted, and returned to Naples when she could. While still in her teens, traveled to London to study musical theater, graduated art school as a designer, and then began attending acting school in Milan.

In the end, music held the upper hand. Gambi auditioned for Milan's International Jazz Academy, and was one of only seven accepted. She graduated with a masters degree, and a burning desire to find a way to sing in a manner that drew upon the various vocal approaches she had come to love – from canzone Napoletana to operatic romanze, Tin Pan Alley ballads to present-day R&B. Was there a way to interweave these traditions and not sound too in the tradition? Could they blend—breathe—together, in an organic, contemporary way?

This was the dream that Gambi shared with Lenny White one evening in late 2009. The budding singer met the accomplished drummer and producer—best known for his ac
complishments in the world of Fusion-era jazz—after a gig in Milan. White was intrigued: "Send me something. If I like it, I'll work with you."

Introducing Letizia Gambi is the result of a year and a half of inspired songwriting and studio work. Its stylistic and linguistic mix – English, Italian, Neapolitan and Spanish – shows off the album's borderless ambitions. There's a satisfying balance of themes that deal with romance and ruefulness from a variety of genres, including more traditional – like Duke Ellington and older cantautore of Naples – to such recent song crafters as Bjork and fellow Neapolitan Pino Daniele (whose longtime favorite "Appocundria" – with its whisp of a melody – receives a grand, sweeping treatment on this collection).

Gambi's voice is front and center, comfortably convincing across a range of rhythms and moods. She ably handles a song's sense of drama, without tipping to an extreme: "Secret Tears", the album's kickoff tune taken from a Donizetti opera, is a stellar example. She can plumb the emotional depth of a lyric, telling its story from beginning to end. She can be facile and loose, or bite into and convincingly sell a hook – as she does so well on her own composition "A Time", co-written with White.

Speaking of originals: most were composed with White's structural guidance, and Gambi's songwriting ability merits its own applause. On tunes like "The Love Of Your Life" and "My Town", she proves herself bilingually adept, marrying message and melody, bringing an Italian lyricism and confidence to her English pronunciation. "Yo Soy El Sur", is especially significant: a powerful statement of Southern pride that literally sings down the various travails and unexpected troubles she faced in recording this album.

True to Gambi's initial vision, the album's primary roots remain the music of her youth, and the vocal jazz she later embraced. It's a musical kinship that makes sense: in both, equal attention is afforded melody as well as embellishment, with highest value placed on a singer's personal stamp. In both, there's an abiding reverence for what came before—songs are kept around for a long time. These shared priorities come through in Gambi's medley of the nostalgic ode to Naples "Munasterio 'e Santachiara" and Ellington's "In A Sentimental Mood". They are there in the playful revival of Bruno Canfora "Soli" (originally a hit for Italian songbird Mina in 1965) as well as Gambi's updating of older classics "Tu Sì 'Na Cosa Grande", and that capo of Neapolitan melodies, "O Sole Mio". (Dig Gambi's impromptu flow on the closing moments of the last.)

There are details that pull upwards on the corners of the mouth, like Barbieri's solo on the tango-ized take of Prince's "The Question of U" (that briefly quotes his own "Theme from Last Tango in Paris") and the eerie vocal echo of a line from Madama Butterfly in "Bachelorette". There are elements woven throughout—Del Curto's wispy bandoneon lines and White's nuanced rhythms—that provide the album a satisfyingly consistent feel and remind the ear of the group effort behind these tracks.

Introducing Letizia Gambi lives up to its title. On it, intermittently, Gambi speaks directly of herself and the deep musical roots she inherited, revealing her natural speaking voice with its colorful accent. It's a novel idea that works well, as does the brief excerpt of a home recording of her uncle singing "Passione"— another song from Naples' rich legacy—that precedes her own rendition, refitted with an electric guitar solo. It speaks to the triumph of the marriage of eras and styles that defines this album and promises much more to come. Brava!

Ashley Kahn is author of Kind of Blue: The Making of the Miles Davis Masterpiece, A Love Supreme: the Story of John Coltrane's Signature Album, The house that Trane Built: the story of Impulse Records and other titles on music and culture. Teaches music history and journalism at New York University.